Have you ever bought a package of “easy-open” food product that wasn’t “easy” at all? Universal design (UD) refers to ideas that are “meant to produce buildings, products and environments that are inherently accessible to older people, people without disabilities, and people with disabilities”. Ergonomics refers to designing work for people, so clearly there is a huge overlap between the concepts of UD and those of ergonomics.

Lately, packaging has become much more diverse – some “resealable” containers raise the expectations that we might be able to store food in the container we purchased it in, while we consume it over a period of time. Other packaging is so difficult to open that it almost thwarts us completely. I love this quote from Sterling Anthony, found at http://www.packworld.com/package-feature/convenience/importance-easy-open-packaging, regarding clamshell packages, in particular:

“Lacking a crowbar, burglar’s tools, or a charge of dynamite, consumers mostly are left to their own devices (literally) to open the more formidably-constructed clamshells.…The more that packaging (via its structural and graphic elements) is successful in stoking the desire for the product, the more it constitutes a form of taunting if it’s an impediment to getting at the product.”

This blog was inspired by a package of deli meat in our fridge, so I’ll focus on that now. Opening cold meat packaging has always been difficult for young and old fingers – a task performed with a pinch grip and lots of force. If a worker had to do that all day, ergonomists would be buzzing around for a solution. But fortunately, consumers only need to perform this task once or twice a week; when scissors are readily available, the poor design hardly warrants a second thought.

With cold cuts, a pair of kitchen scissors can generally rescue most of us from the frustrations of not-so-easy-to-open containers, but I know I personally begrudge having to dirty scissors, and a storage container, for what was marketed as easy-to-open, and re-sealable. We have teenagers in our house, so we go through a lot of lunch meat. As I see it, a purchaser can be influenced, not only by the quality of the meat, but also by its package. In particular, with lunch meat, the variables appear to relate to ease of opening (do I need a tool, do I have the strength to open with my fingers?), the ability to re-seal (thereby saving the use of another container, and promoting food safety), and access to the product inside. Here’s what I’ve learned about the options at our local grocery stores:

Deli bags – My son greatly appreciates the “zip” closure bags, as long as they are strong enough not to tear when you remove the adhesive label that first time. (Sadly, not always the case.)

Ease of opening: A+ (A pinch grip, but a reasonably easy task with two hands.)

Access to product: A (The entire hand fits inside!)

Re-use: A (Assuming a strong enough bag….not all groceries are equal.)

Peel apart: There are a few variations of these – typically the user is required to separate two corners and then pull them apart (shown at left). This can require patience to separate the edges. The task also requires a pinch grip and substantial force to pull the corners apart. Sometimes the seal isn’t very reliable when you re-close the container, so in our house, we often put this package inside another bag or container.

Other packages have a “peel back” window  (lower left); the window in the top of the package opens from the

bottom as a flap. After you have retrieved the meat you want to use, the flap flips back down and re-seals. It is less difficult to open, and seems to hold up to repeated opening and closings.

Ease of opening: C (Corners can be difficult to separate, and the small plastic corner or tab can be slippery to grip while pulling.)

Re-use: B (The seal may not re-stick, allowing air into the container.) 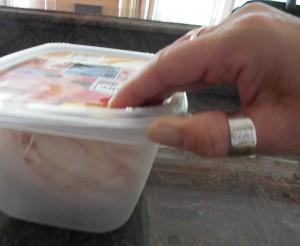 Bag in a container: Costco sells sandwich meat inside a re-sealable (and re-usable) container. The bags of meat inside are not re-sealable, so you need scissors to open the inside bag. How many pairs of scissors should I need, in order to have a clean pair available for every container I might need to open between dishwasher cycles? Bonus: the washed container is just the right size for a banana loaf.

Force to open: Less than 1 kg thumb push to remove lid; grip force to cut bags depends on type and sharpness of scissors

Access to product: B (Container opens, but meat needs to be re-packaged after opening.)

Force to open: Less than 1 kg thumb push to remove lid; grip force to cut bags depends on type and sharpness of scissors

Re-use: B (Container is re-usable, but the product needs to be re-bagged once it’s opened.)

Many food products now come in “re-sealable” containers. Another of my pet peeves is a bag with a “tear here” strip that causes me to rip right through the “zipper” part of the bag.  Karen doesn’t like the hard plastic tabs on ice cream and feta cheese tubs that you have to break off in order to remove the seal strip around the lid. I’m sure you have your own frustrations. We encounter them so often they are taken for granted.

Thankfully, market demand is raising the expectations for packaging. Purchasing decisions are influenced by not just what’s in the package, but how hard it’s going to be to get the product out. I think we’re making progress. Before you know it, sandwiches will be making themselves! (Or…sandwiches will be made by kids younger than 16!)