Two ways to lift a rock – which is more “ergo”? 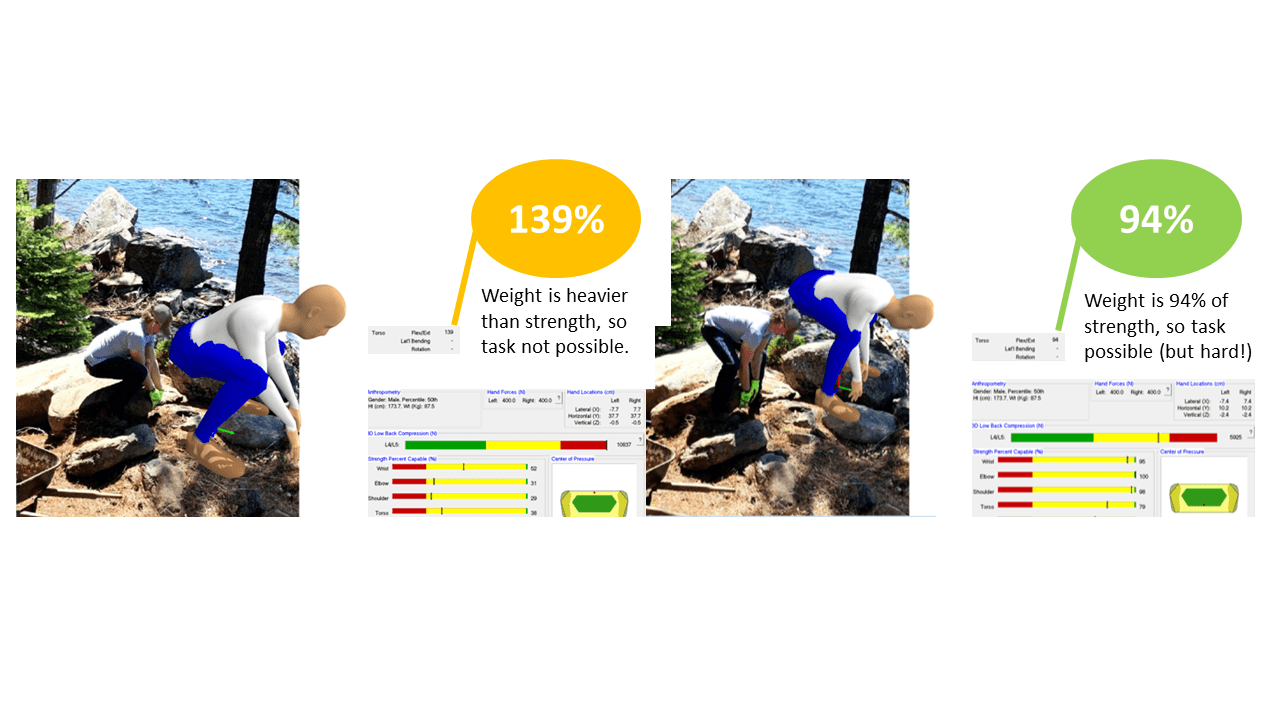 Carrie’s dad lives in Muskoka, where landscaping the shoreline is always a work in progress. There is one rock pile, in particular, that has been by the dock for 20 years, waiting to be tackled. Carrie’s son, Dax, spent some time at his Grandpa’s this summer. Missing the gym, he was willing to challenge the rock heap. With his ergonomist mom hovering over him (literally, from the deck above), he independently tested out a couple of lifting techniques until he found a way to dislodge one particularly heavy rock. Carrie didn’t say a word…she just photographed his attempts. Here’s how it went: 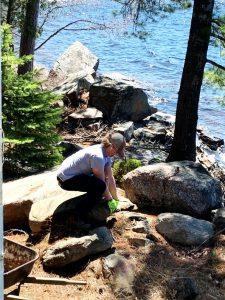 During his first attempt, he used a squat method, and he leaned back, attempting to use his body weight to pull the rock up. It didn’t budge, and thankfully he didn’t lose his grip, because he clearly would have toppled backwards. Because his hands are so far forward from his feet and lower back, the load on his spine was very high, and our biomechanical model later showed that he should not be able to lift the rock this way. The load represented 139% of an average male strength. 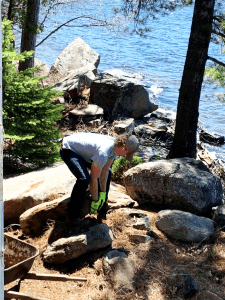 Eventually, he found a way to straddle the rock, keep his back straight, and lift with his legs and back. His feet and lower back are closer to his hands, horizontally, so the load on his spine is less than the previous method. The rock didn’t have handles, so the grip was still awkward, but the grippy gloves did help. He needed to plan his footing so he could back up while lifting the rock, to avoid losing momentum as the rock was raised and flipped back. The biomechanical model “predicted” that this task would take 94% of average male strength. (Very hard, but not impossible.)

We’re guessing you’re surprised that the full-squat-lift didn’t win out in this case, but that’s why we use biomechanical models – the “best” method isn’t always a text-book case. In this situation, the forward reach to the load was the most critical factor.

If employees in your workplace need some help choosing the best way to do a task, ask us about our “best practice” studies. We can help to root out the best ways to do certain tasks (ideally before they’re done, not after!). We’ll provide objective evidence in concise summaries, to help workers to try and adopt these practices.

And if your workplace includes manual handling of rocks or loads like these, we can help you to find appropriate engineering controls for employees who are not looking for a workout at work. Please don’t ask your employees to lift loads like this all day!