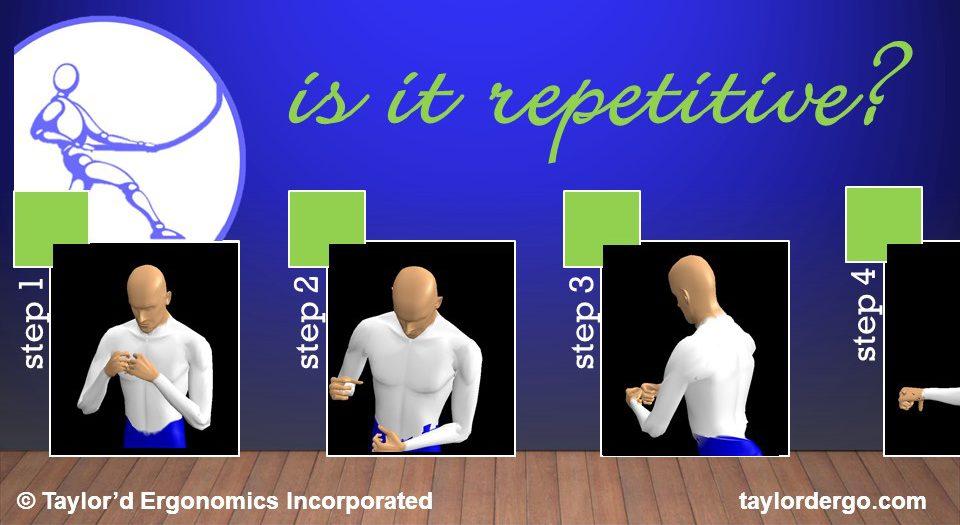 We are often asked to help employers accommodate workers with restrictions against “repetitive” work, or “repetitive” shoulder, back, or wrist demands. What is “repetitive”?

Over the years, “occasional/frequent/constant” have been the most common categories that we have encountered, when reviewing PDAs from other sources. What boggles us is that percentages are not frequencies. If I asked you how often you brushed your teeth, you likely wouldn’t say “less than 2% of the day”. Further, it’s unclear whether the analyst is meant to account for the task itself, or the entire duration that a task is performed intermittently: a task that occurs for 6 seconds per minute all day long could be BOTH occasional (10% of the cycle) and constant (100% of the day).

The WSIB’s “Physical Demands Information Form” asks for these criteria:

Not at all (stays in the same position)

These criteria are preferable, in my opinion, because the frequencies are described in frequency units (although they are still somewhat subjective). However, how would you describe a task that is “constant” but only occurs for an hour per shift?

The WSIB does not specify a format for PDAs, nor do they provide guidance on what is meant by “repetitive” demands. On the WSIB’s Functional Abilities Form (which injured workers bring to their employer), the health care provider simply checks off “Bending/twisting repetitive movement of (please specify):_____________” under the category of “Restrictions”.

At Taylor’d Ergo, we describe the demands for each body part as “static”, depending on how much of the cycle is spent in that posture, and “repetitive” based on the number of movements per minute at that body part. We have suggested numerical thresholds for these demands, but we also report movement frequency for each body part, and the percentage of the time that awkward postures are held, for each body part (for repetitive jobs). This allows a health care provider to interpret the demands specifically for the patient.

Here’s a hypothetical example. Dr. Smith recommends “no repetitive bending/twisting of the right shoulder”. The pre-injury job is shown in this video. Clearly this is a repetitive job, with some repetitive demands. But the worker’s right arm stays pretty close to his body throughout the cycle. (If we were asked to assess this job, we’d want to see it from the other side, and we’d want to see more than one worker. But based on the video alone, the right shoulder appears pretty neutral.) How many times per minute does this worker move his left shoulder? His wrists? His back? What percent of the cycle is spent with his neck bent? These are values that we would report in a PDA for a job like this.