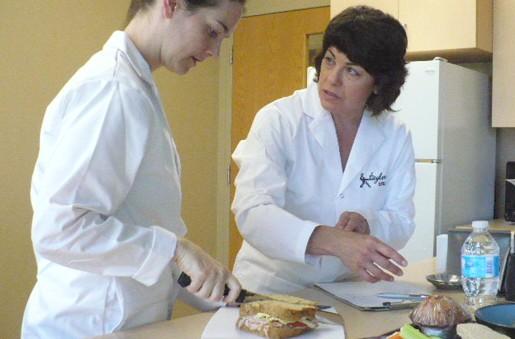 I have never been athletic, so the value of coaching hasn’t really been brought home to me until recently. I’ve learned over the past decade, since my kids have become involved in competitive sports, that a good coach can make all the difference between a mediocre and passionate performance. My kids do well in their chosen activities, so I know we’ve been fortunate to have some excellent coaches, despite the fact that many of them have been volunteers.

I read an article by Melissa Campeau in January edition of the HR Professional  that got me thinking about how we use coaching in ergonomics. At Taylor’d, we’re very cautious about training workers “how to do their job”, because we figure that workers know their jobs best. The “lift with your knees” mantra has long ago worn thin with us, given the plethora of situations where it simply does not apply. And professors like Stu McGill at the University of Waterloo have cautioned about “consultants” who think that they “are the expert and think that [they] know what is best for the workers.” (This, along with some other wise advice for consulting ergonomists, was published in his book Low Back Disorders.)

We have recently taken a very hard look at what job coaching can do for workers, and the end result was the development of four courses that focus on ergo changes that workers can control within their workplaces. (Four courses, because each course is aimed a different group of workers: office, manual handlers, drivers, and “industrial” workers.)  Following each course, we encourage clients to keep the ergonomist around to provide one-on-one job coaching for participants. We recognize, promote, and value the fact that most ergo changes seek to fit the workplace to the worker, by changing the design of the work. Changes that focus on how the worker can best adapt to his/her workplace naturally run counter to our instincts as ergonomists! But here is what we’ve learned.

1. Many ergo changes are not well utilized because people don’t know how or why to use them.

Do you have a hoist that is collecting dust? Have you provided “ergo” chairs but the backrests or seat pan sliders have never been adjusted? Have you bought some sit/stand workstations but see that people are still sitting at them for the entire shift? Similarly, drivers often don’t take advantage of vehicle features, such as lumbar support or tilt steering, which can make a world of difference to comfort and safety. Sometimes all it takes is a bit of training, work hardening, and some personal guidance, and voila, your investment is paying dividends.

2. Sometimes what we “know” isn’t well translated into knowing “how to” do it.

I know that I need to maintain the curve in my low back, but until I practice this in a classroom and in my workplace, I don’t really know how to do it. I love the distinction between “training” and “education”. Training and coaching, develop skills, whereas education develops knowledge. I don’t know who came up with this, but the difference between training and education is crystal clear when you consider whether you want your teenager to have sex education, or sex training. Clearly, we would NOT promote skill development in this group of people! In the workplace, however, we would prefer training (or coaching) over education.

3. Some people are naturally reluctant to change, and some organisations or policies promote this reluctance.

If I’m trained to grasp the part with my left hand and then install a component with my right, it may never occur to me to try it any other way. Perhaps I think that there’s a reason that I need to hold it with my left. (And quite possibly there is!) But sometimes a different method will result in less strain on the body. People in our training are consistently surprised at how useFUL their left hands are. Similarly, people need to be reminded of which direction allows them the greatest push strength, how to get closer to an object before lifting it, and why it helps to stand with a wider base of support. Do people really understand why their choice of footwear matters? (They do after our workshop!)

4. We don’t push our ideas down anyone’s throat.

We teach the basic concepts that are important in ergonomics, and then we ask participants to consider, at their workstations, which of these apply to them. We provide a checklist, which forms the basis for coaching. The ergonomist is able to guide, or coach, workers to find methods that minimize strain, and maximize comfort, quality, and productivity.

There’s a good case to be made for having senior, experienced workers coach new employees. Similarly, we often find that workers who have suffered an injury have often developed useful techniques that others can benefit from. However, sometimes a set of outside eyes can see things that even the best workers will miss. Workers may be more willing to take advice from an “expert” ergonomist, particularly if it’s presented as “suggestion” rather than “directive”.

In the HR Professional article, the author reviews “who needs a coach”. She pointed out that coaching is best received when a change is happening in an organization, or when an improvement is being sought. I would agree…we get called in when change is anticipated or has already occurred, such as layoffs or increases in production output. We also get called when someone, somewhere, identifies a cluster of injuries that appear preventable.

What if the problem isn’t caused by a lack of skills? If we come and discover an “ergo nightmare” (which was what we feared for all those years that we didn’t offer this type of training), then we discuss the “opportunities” with the client. We would never say to the workers, “Holy cow, I can’t believe you’re working under these conditions!” We would work with them to optimize their techniques, using what is available to them. Later, we would communicate back to the client that there’s more going on than workers who are not using the best techniques.

Our experiences with job coaching have been very positive. We even have developed a reporting template, used when a client asks us to document coaching provided to a specific worker for a specific concern. We show photos of the worker using his or her “normal” method, and then, after we’ve worked with him/her for a while, we are also able to photograph the “ergo” method. (Photography, by the way, can be an extremely valuable tool in helping workers to “see” their own postures.) The report provides a measure of accountability for the worker, and due diligence for the employer.