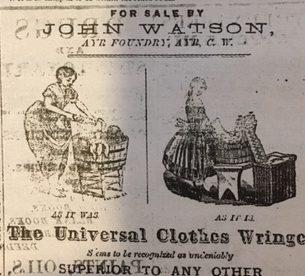 In honour of Canada’s sesquicentennial, our local newspaper, “The Ayr News” published a copy of the newspaper that they had published in 1867. I was lazily reading through it on a Saturday morning when I came across the ad shown above. I had spent the previous few work days creating a presentation of “before” and “after” photos for case studies. I was stunned by the similarity between the graphics in the ad, and the work that we have been doing, 150 years later. Naturally, I ran around the house and shared the clipping with as many people as I could find. I love how the “As it was” graphic shows the “worker” in a bent position, exerting lots of effort, while the “As it is” graphic clearly shows better posture and much less exertion!

We think of ergonomics as a young science; we’ve really only practiced it actively for about 60 years, and it’s only become mainstream in the past 20 or so. However, musculoskeletal disorders (MSDs) attributed to particular types of work have been recognized for much longer. In school, when we learn about the history of ergonomics, we hear about “washerwoman’s elbow ”, “carpenter’s elbow”, “miner’s knee”, and – horrors – “writer’s cramp”, identified over 300 years ago.

We also tend to think of “progress” as implying improvements. When I was a younger ergonomist, I naively worried that, once we had addressed all the issues in the world of work, there would be nothing left for me to do but retire. And while we do seem to be chipping away at the injuries, reducing MSD rates well below half of all injuries, ergonomists can count on new designs that create new challenges. Take technology for example. One would think that technology would make jobs easier, and reduce physical demands. In many cases, this is true. However, our youth seem intent on using hand-held devices to train their bodies into c-shaped creatures. (Not “sea creatures”, but “c-creatures”!) Somewhere along the line, we’re going to have to correct this problem, or tomorrow’s retirement homes will need pods instead of beds.

Anyway, the takeaway message is that it is always possible to improve upon a previous design to make it easier to use, more comfortable, more productive, and to allow us to perform at a higher quality output. Our jobs are safe, for at least another 150 years.