Worried about slips and falls?

Many of us worry about slips and falls while walking between a vehicle and home. My dad has been staying with us for the past month, and I worry about him wiping out on our driveway. (The driveway is crushed stone, so it’s very hard to clear of ice.) Dad went out and bought some spiked boots, which have performed very well, although they are hard to drive in, and they have to be removed before stepping onto the hardwood. Did he choose the best boots?

Prior to the 2021 study, the researchers tested footwear in a lab setting, to determine which type of footwear should perform best. Their test involved having volunteers walk across an icy surface, at various angles. They determined the steepest angle that participants could walk up and down without slipping, and they repeated this study using a variety of footwear. This test is called the “Maximum Achievable Angle” test; the boots that allowed people to walk up and down the steepest angle were deemed the best for icy weather.

The study published more recently tested how well the best boots performed out in the real world. Did the boots with the best slip-resistance in the lab setting also prevent slips amongst workers in the real world? A total of 100 personal support workers were randomly assigned to either a test group or a control group. The test group workers wore the footwear that performed best in the lab (Sperry Women’s Powder Valley boot, model STS97168, for female participants and the Windriver Men’s Bivy boots. model number 5CPEWRF17-5251, for male participants. 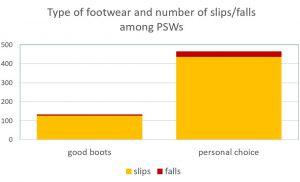 The test group experienced 127 slips, and 6 falls, during an 8-week period. In contrast, those in the control group (wearing whatever footwear they chose) experienced 436 slips and 30 falls. That’s 2/3 fewer slips and falls for those wearing the “proven” footwear! Impressive!

The highest performing footwear did not have spikes like dad’s; instead, they had a mixture of soft and hard rubber compounds specially formulated to grip the surface of the ice, and also dig into the ice to provide additional tracking.

In addition to choosing great footwear, here are a few tips to pass on to employees who spend a lot of time travelling between locations:
– Take a look before you exit your vehicle, and use 3 points of contact for entering and exiting. That means, hold onto the vehicle, seat, or wheel with both hands, so if you slip, you can recover.
– If you drive a “high” vehicle like a pick up truck, you’ll be tempted to exit while facing outward. But it’s difficult to maintain 3 points of contact while facing forward, and you’re much more likely to fall if your foot lands on ice. Make a habit of always climbing down while facing the cab, so you can hold on.
– Carefully consider what and how you carry equipment. There is no magic solution for hauling equipment in Canada, but minimizing what you take is a start. Do you need a purse AND lunch bag? Do you need that coffee ON the road?

You want to know what type of footwear to choose, don’t you? Visit www.ratemytreads.com

Stay safe out there!