Ergo-to-go: Strains & sprains at the drive-thru

Although a tour through the drive-thru may no longer be a morning ritual en route to work, those who work in delivery windows are busier than ever before. Have you paused to consider the physical demands of this job? We have.

Necessity is the mother of invention; in the early days of the pandemic, drive-thru restaurants found a way to attach the debit machine to a stick, so the attendant could pass the machine to the driver without touching it. This intervention was motivated by Covid, not ergonomics, but it certainly has implications for body mechanics. By using a stick, the reach required to transfer the debit machine was reduced. With a light item like a debit machine, this was a nearly-magical invention.

A bit further into the pandemic, some drive-thru establishments devised ways to pass the food and drink order to the driver using a similar extension tool. Delivering the order on a stick allows the attendant to use a more upright posture. Passing a tray of food to a driver, rather than passing items individually, also saves time, speeding up the drive-thru process. Intuitively, this seems like a pretty amazing idea.

It depends. The following biomechanical analyses are hypothetical, since I have not been invited into a restaurant to measure the reaches and forces. I found some photos on the internet, and based my assumptions on a “typical” order, and the approximate heights and reaches from the photos. Not as objective as our assessments typically are, but a “fun” way to spend a Saturday morning during the lockdown. 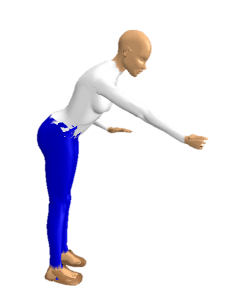 In the drive-thru, forward reach has always been a concern. (Of mine, at least. Do you think about it too?) Pre-Covid, passing a cup of coffee or a debit machine through the window to a driver used about 50% of back strength and 30% of shoulder strength, assuming that the attendant leaned with the free hand on the counter to take a bit of strain off the back. (I won’t go into whether this would be “high risk” or not – that depends on the frequency and duration of the task.) 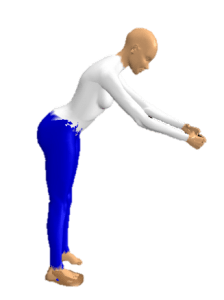 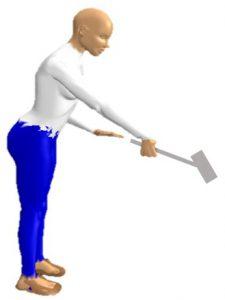 Now let’s fast-forward to 2021. With a reach extender for a debit machine, the loads on the shoulders and back range between 25-35%. Reducing the reach to pass light items to the customer has a beneficial effect. 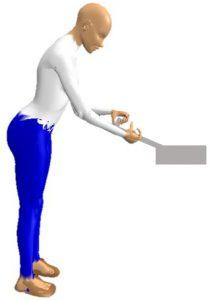 But the use of extenders for heavier items like drink trays might not be so magical. Assuming that the attendant supports the entire weight without resting it on the edge of the drive-thru window (as I observed in photos and videos on the internet), the extension creates an extra load at the wrist. In fact, the load at the wrist might require more than 100% of maximum strength, meaning that some people won’t be able to complete this task using the device as it was intended.  The heavier the weight in the tray, the higher the loads on the back, shoulders, and wrists. Despite the generous length of these devices, the users tended to “choke up” on the handle, holding it quite close to the tray itself.

In the videos that I watched, I also noticed that the drivers tended to let the attendant reach toward them with the extender, rather than reaching out toward the window. The extender might serve the driver more than the employee! And I don’t know about you, but I’m more likely than ever before to be ordering 4 coffees and 8 donuts, to take home to share with my bubble; I’d be curious to learn if order weight is trending upward during the pandemic.

How could an ergonomist help?